Kazakhstan, the Republic of Kazakhstan, is a transcontinental country largely located in Central Asia with the most western parts of it being located in Eastern Europe. It is the world’s largest landlocked country, and the ninth largest country in the world. Kazakhstan is the most dominant nation of Central Asia economically, generating 60% of the region’s GDP, primarily through its oil and gas industry. It also has vast mineral resources. Kazakhstan is officially a democratic, secular, unitary, constitutional republic with a diverse cultural heritage. Kazakhstan shares borders with Russia, China, Kyrgyzstan, Uzbekistan, and Turkmenistan, and also adjoins a large part of the Caspian Sea. Kazakhstan has an estimated 18.3 million people as of 2018.

Advantages of Studying MBBS in Kazakhstan

Al-Farabi Kazakh National University is the leading institution of the system of higher education of the Republic of Kazakhstan, which was the first to pass the state certification and which has justified its right to realize academic activity on all specialties and at all levels. The University has an enormous educational, scientific, spiritually educational, innovative, and production potential which is aimed at the training of specialists of the highest qualification, further integration into the global educational space, development of fundamental and applied research, their implementation into production. Today al-Farabi KazNU offers you a wide range of specialties. The university consists of 16 functioning faculties, 67 departments, 32 scientific research institutes and centers, a techno-park; more than 2000 professors, doctors, scientific candidates and Ph.D.’s, more than 100 academicians of the largest academies, more than 40 honored figures of the Republic of Kazakhstan, about 40 laureates of State and nominal awards of RK and 40 laureates of the young scientists’ awards, 47 fellows of state scientific fellowships. More than 18000 students and masters at the multilevel system of higher professional education study in the university. We cooperate with 418 largest international universities of the world on the realization of joint international educational programs, exchange programs for students, and internship.

Al-Farabi KazNU is the only University in Central Asia to be listed in the top 210 among the world’s best HEIs by the international QS World University Rankings. Moving forward another 13 positions, it took the 207th place. Only two Universities in the post-Soviet space are included in this group – KazNU and Lomonosov Moscow State University (RF).

The QS is one of the most authoritative and influential international agencies recognized by all countries, which for many years conducts a global ranking of the best institutions of higher education in the world. The first three places in the ranking are taken by Universities from the United States – Massachusetts Institute of Technology, Stanford, and Harvard Universities, respectively.

KazNU as the leading University in the country is purposefully working on the implementation of an important state task set by the First President of the country – Elbasy Nursultan Nazarbayev – to enter the top 200 best HEIs in the world. Over the past five years, the University has advanced in the QS WUR rating to more than 400 positions. In world practice, no University has achieved such growth dynamics! According to recommendations of the QS experts, KazNU’s experience is studied by leading Universities of the world. This indicator is convincing evidence of its high competitiveness in the global education and science market.

It should be noted that according to the results of the subject rating «QS WUR by Subject» KazNU was the first among the Universities of the CIS countries to enter the group of 51-100 best HEIs in the world. In total, this rating includes six specialties of a leading Kazakhstani University.

Taking into account the growing role of KazNU in the global scientific and educational space, the QS decided to hold an international forum in Kazakhstan. The world-level event «Towards Excellence Based on the Harmony of Human Heritage and Advanced Technologies» will be held on the basis of Al-Farabi KazNU in September 2019. This is an indicator of high global prestige, not only of the University but also the entire system of higher education in Kazakhstan.

KazNU demonstrates strong momentum in other reputable international rankings. Thus, according to a study by the British Agency «Times Higher Education», KazNU first among the Universities of Central Asia entered the list of the best HEIs in the world. In the global ranking of the most environmentally friendly HEIs «UI Green Metric Ranking of World Universities», it took 172 places, in the European rating of the European Scientific and Industrial Chamber, it received an «AA» rating and ranked among the leading European HEIs. According to a study of the famous international organization «Great Value Colleges» (USA), the University took 31 places among the technologically advanced Universities in the world.

An important factor in the successful promotion of KazNU in the ratings was a large-scale structural modernization, high efficiency of results-based management, and the intensive development of a unique infrastructure, which over the past five years has grown by almost 50%.

The global recognition of the University is associated with the expansion of international cooperation and the development of internationalization, as well as with an active work of KazNU as the Global Hub of the UN «Academic Impact» Program on Sustainable Development.

By the decree of the President of the Republic of Kazakhstan N. Nazarbayev No 648 of July 5, 2001 “On the provision of special status to certain state higher educational institutions”, the university received the status of the Kazakh National Medical University. In 2004, the students admitted were to the specialty "Management" in part-time and full-time studies. Since 2007 there was magistracy on "Medicine» and Baccalaureate on "Nursing".

The Mission and Vision of the University are as follows:

Serving the society through educating competitive specialists, capable of management, protection, and strengthening the health of the nation; improving healthcare through the integration of advanced educational, scientific, and medical technologies.

An innovative university that is constantly developing on the principles of the academic system of health care and science, in which professionals, inspired by a single mission, sharing the same values, join forces to generate, transfer and use health knowledge and in the name of people's health.

This University is believed to be one best university to pursue MBBS in Kazakhstan. The university is situated in the rural area of Almaty city and was founded by Dr. Mukhtar Aliyecih Aliyev in 1930. In the year 2001, the Kazakhstan government recognized the university as the national university because of its excellent academic results. The Ministry of Science and Education of the Republic of Kazakhstan has accredited the university. The mission of Kazakh National Medical University was to create a unique model of an innovative and competitive focused institution to provide high-quality medical education to all the students coming from different corners of the world. Kazakh National Medical University offers a variety of courses under the bachelor, master, and doctoral programs. At present, the university has more than 11000 students with more than 1500 faculties which include doctors of science, candidates of science, professors, and laureates of State prizes. All the faculties are working constantly to facilitate the students in acquiring supreme knowledge from accomplished academicians.

The university has introduced and certified the System of Quality Management in the field of “Development and educational services rendering in the sphere of high professional education in medicine; advanced medical high school studies of doctors and teachers; rendering therapeutic  diagnostic services; carrying on scientific investigations in medicine” (Certificate SGS (Sweden) № HU 11/5879 of June, 20,2011). The control of System of Quality Management is being observed by 40 certified internal auditors including 5 students. Management is realized through Supervisory board, Academic and Quality Councils weekly meetings of University administration, monthly meetings of department heads, and students' active bodies. For effective integration with University partners new innovative and educational consortium "Corporate University" has been created. From September 2011 University developed the program of Innovative development for 2011-2014 years.

University Administration closely cooperates with the bodies and organizations of Public health. Annually Rector with Pro-rectors hold out-door conferences with the heads of Almaty, Zhambyl, Kzyl-orda, South Kazakhstan, West Kazakhstan, North Kazakhstan, Atyrau, Mangistau, oblasts and Almaty public health departments on the problems of training interns, training and retraining and advanced studies of doctors, pharmacists, nurses. Besides pedagogical workers of medical education, institutions study at the advanced medical courses on the base of the Centre of continuous education.

The University has the following Medical Schools and Faculties at present:

Over 5 thousand children from all over the Republic, nearly 2.5 thousand of them from rural areas received medical care in "Aksai" Children's Clinic. More than 2000 complex operations are performed there. Annually about thousand inpatients and 25 thousand outpatients are treated at the Professor's clinic. Specialists with more than thirty years of work experience not only treat and care for patients but also train young doctors and held research works. Recently the center for innovative medicine was opened at the clinic which performs unique, minimally invasive operations. In 2019 the Professor’s Clinic of KazNMU started managing the Ophthalmological Center where a full range of surgical and therapeutic ophthalmic services will be provided. Experienced ophthalmologists conduct comprehensive eye examinations and specialize in the diagnosis and treatment of various eye diseases. The center is equipped with ultramodern equipment. The Clinic of Internal Diseases is the leading one in Kazakhstan in the field of internal pathology: hepatology, rheumatology, and endocrinology. There is a unique diabetes center in the clinic and a multidisciplinary approach to manage patients with diabetes is implemented.

Kazakh National Medical University signed a Memorandum with one of the largest manufacturers of medical equipment of GE Healthcare in the world. Within its framework, the company will provide technologies in the field of medicine, information technology solutions for personalized medicine to the University. The development of joint educational programs in the field of radiology, cooperation in the field of science, and exchange of experience is planned, particularly the courses for specialists in the field of radiation and ultrasound diagnostics, nuclear medicine, and information technology in health care. The agreement with Takeda Kazakhstan, where they begin joint projects in various areas of the scientific and pedagogical activity, was also signed. Students will acquire knowledge and practical skills in innovative methods of treatment. The main purpose of the Memorandum is to establish a long-term partnership, where the students of Kazakh National Medical University have practical training. Also, it is planning to exchange the experience and knowledge with Philips Company using Philips technologies and innovations in the field of visual diagnostics in computer and magnetic resonance imaging on the clinical basis of the University.

Recently five leading research Institutes were transferred to the structure of the University located in Almaty. 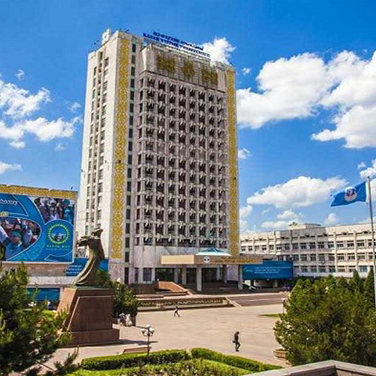 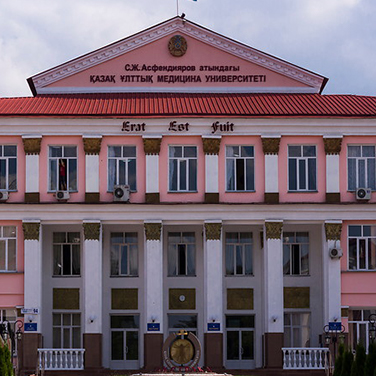 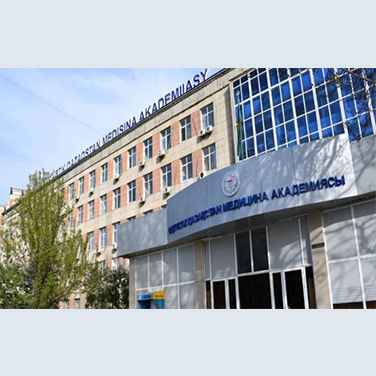